Get a diagnosis and prescription virtually, from the comfort of your own home or office. 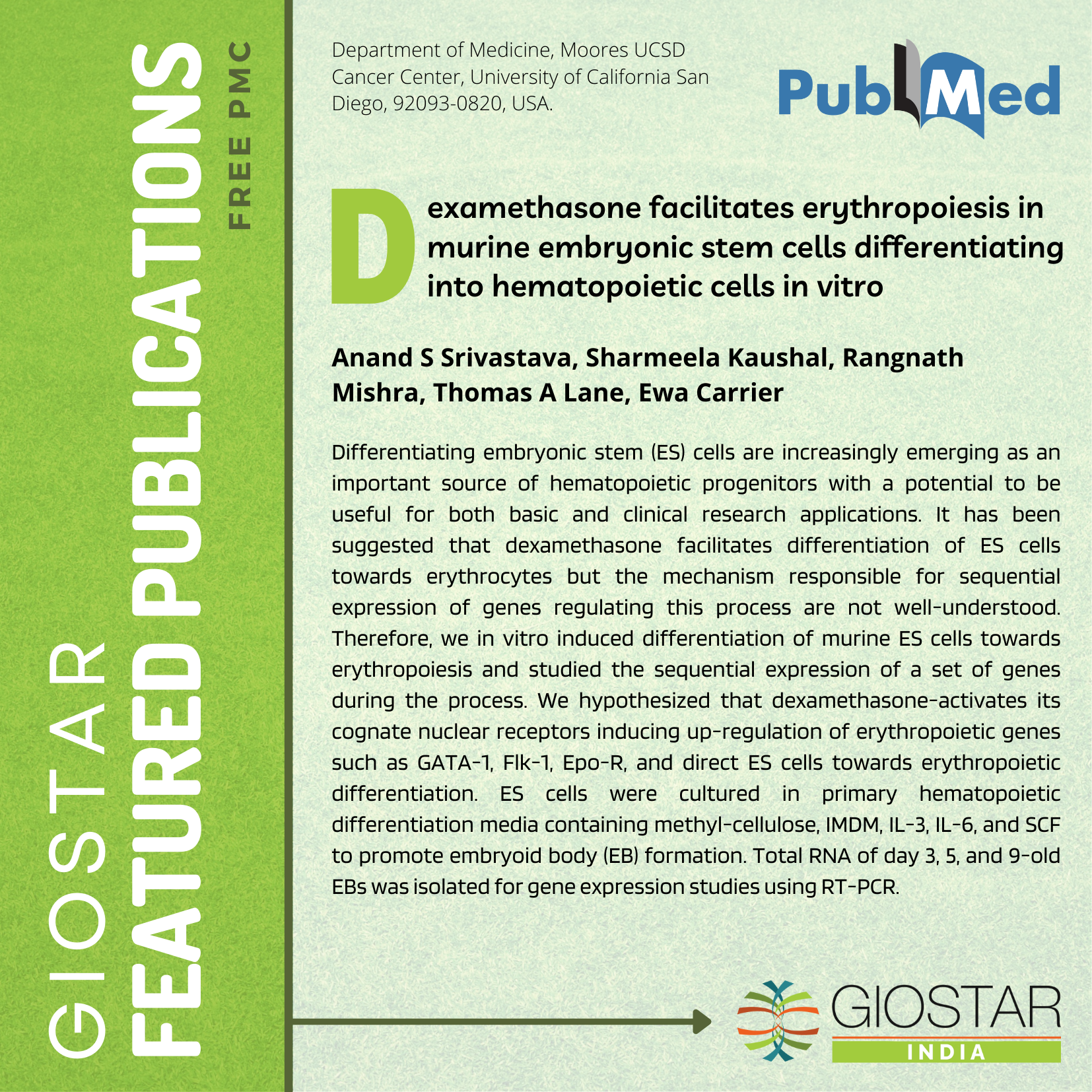 Differentiating embryonic stem (ES) cells are increasingly emerging as an important source of hematopoietic progenitors with a potential to be useful for both basic and clinical research applications. It has been suggested that dexamethasone facilitates differentiation of ES cells towards erythrocytes but the mechanism responsible for sequential expression of genes regulating this process are not well-understood. Therefore, we in vitro induced differentiation of murine ES cells towards erythropoiesis and studied the sequential expression of a set of genes during the process. We hypothesized that dexamethasone-activates its cognate nuclear receptors inducing up-regulation of erythropoietic genes such as GATA-1, Flk-1, Epo-R, and direct ES cells towards erythropoietic differentiation. ES cells were cultured in primary hematopoietic differentiation media containing methyl-cellulose, IMDM, IL-3, IL-6, and SCF to promote EB formation. Total RNA of day 3, 5, and 9-old EBs was isolated for gene expression studies using RT-PCR.
Cells from day 9 EBs were subjected to secondary differentiation using three different cytokines and growth factors combinations: (1) SCF, EPO, dexamethasone, and IGF; (2) SCF, IL-3, IL-6, and TPO; and, (3) SCF IL-3, IL-6, TPO, and EPO. Total RNA from day 12 of secondary differentiated ES cells was isolated to study the gene expression pattern during this process. Our results demonstrate an up-regulation of GATA-1, Flk-1, HoxB-4, Epo-R, and globin genes (alpha-globin, betaH-1 globin, beta-major globin, epsilon -globin, and zeta-globin) in the 9-day-old EBs, whereas, RNA from 5-day-old EBs showed expression of HoxB-4, epsilon-globin, gamma-globin, betaH1-globin, and Flk-1. Three-day-old EBs showed only HoxB-4 and Flk-1 gene expression and lacked expression of all globin genes. These findings indicate that erythropoiesis-specific genes are activated later in the course of differentiation. Gene expression studies on the ES cells of secondary EB origin cultured in media containing dexamethasone showed a down-regulation of GATA-3 and an up-regulation of GATA-1, Flk-1, and Epo-R in comparison to the two other cytokines and growth factor combinations containing media. The secondary differentiation also showed an enhanced production of erythrocytic precursors in dexamethasone containing media in comparison to that in the control media. Our results indicate that dexamethasone can prove to be an effective agent which can be employed to enhance differentiation towards erythrocytic progenitors from ES cells.
Read More